I’m old enough to have followed the AIDS pandemic from the start in 1981 when a group of previously healthy young men in the USA started getting some unusual diseases. Some men got a rare form of cancer that had only been seen in older men. Others caught pneumonia from microbes that otherwise only successfully infected severely weakened people. Some of the young men had both skin cancer and pneumonia, and several of them died shortly after the diseases were detected. The only thing these young men had in common was that they had all had sex with other men.

This was an alarming situation, and the condition quickly came to be known as “Acquired Immunodeficiency Syndrome” or AIDS. Soon similar cases were discovered amongst intravenous drug users, and hemophiliacs – people who are dependent on frequent blood transfusions to stay healthy. 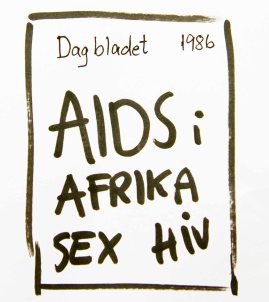 My boyfriend lived in Zambia in the 80’s, while the newspaper Dagbladet published disturbing news about AIDS in Africa.

AIDS rapidly became a disease everyone had heard of through the media. It was obvious that the new disease was dangerous, and that it could be transmitted either through blood or via sexual contact.

In 1984 French researchers found the first sign that AIDS was caused by a virus, and the following year a test became available to determine whether a person was infected by human immunodeficiency virus, or HIV. It soon became clear that HIV was a rapidly growing global epidemic.

HIV primarily infects a subset of white blood cells called CD4+ T cells. These cells are the immune system’s commanders, and control the activity of many of the other immune cells. When these “commander cells” disappear the patients with HIV become seriously ill from infections that are usually harmless and easily defended against by the immune system. HIV/AIDS showed us all like never before that we have an invisible immune defense that keeps us healthy, but when important parts of the immune system are gone the consequences are dire.

In our part of the world the prognosis for people with HIV has improved significantly and a positive HIV-test is no longer considered a death sentence. Thanks to medication that keeps the virus in check HIV has become a disease you can live with. However, the virus remains a threat to public health in countries lacking sufficient healthcare and with limited public awareness to help stop the spread of the disease. Young adults die needlessly of infections they normally would have survived if their immune systems were not weakened and destroyed by HIV.